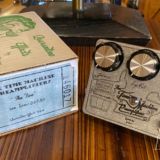 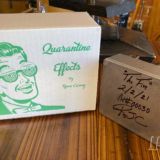 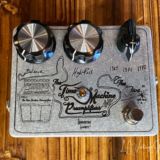 Gimme Shelter! The Thrill is in fact NOT gone... ;) “The Five” brings your 70’s Blues/Rock fantasies to life. Go out of phase, and think like the King, or Peter Green on the 1969 setting... or Let is Bleed and unleash your inner “Keef” with the help of 1971... 1972 recalls Zoso’s “clean” tones from Zep IV... A great tool for anyone looking to add those distinctive early 70’s sonic textures to their arsenal. Slide and steel players; If you dream of edge of breakup clean tones, without having to sacrifice sustain in the process, this one is for you. Designed and hand wired by Guitarist/Engineer Reeve Carney, right here in the USA.

1969 - This circuit is my homage to late 60’s B.B. King ala “Thrill Is Gone,” as well as the likes of Peter Green’s tones of the same era. But as you’ll find to be true with other circuits in the series, play a bit of “Come Together” off of Abbey Road, or another song from the record, and there you are... This is another go to setting for me for anything Blues oriented which needn’t be heavy handed in its approach. One of the benefits here, as with all circuits in the series, is the way in which the particular harmonics of each circuit distinctly influences playing style. The circuit design of The Time Machine Preamplifiers Series
excels in its ability to intensify responsiveness, while also injecting a very specific character to the signal chain of the user.

1971 - Calling all slide players! This circuit was designed as an homage to Keith Richards, particularly focusing on his early 70’s tones. That said, you can go full on T-Rex especially when hitting the front end of “The Five” with another Preamplifier, boost or overdrive pedal... But of all the circuits in the series this one does something quite special when met with a slide guitar... In that it imparts sustain without obscuring the purity of tone with unwanted compression or dirt. It keeps the tone on the edge of breakup, all the while increasing sustain. A slide players dream. I have a feeling Steel players are gonna love this one too.

1972 - Utilizing the same transistor in the second stage of the 1967 setting from “The Four,” the equalization achieved in the design of this particular circuit imbues the 1972 setting with a decidedly softer playing feel than the other circuits on “The Five”... The aim being to recreate the equalization and saturation characteristics of Jimmy Page’s “cleanest” tones on Zep IV. Boost into, or out of this circuit, and you can easily go from clean to scream in an instant! Or crank up the balance knob and back off your instrument’s volume and you’re on stage with Donny Hathaway at the Troubadour (or The Bitter End) for the shows that became his legendary Live record...