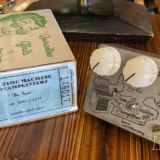 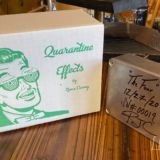 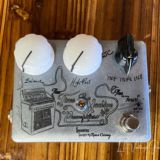 The 1960’s saw the boundary pushing, counter-cultural Boomer generation finding their voice through the evolution of Rock n’ Roll... Amidst political unrest and uncertainty, creativity and innovation thrived; conjuring a voice for a disillusioned generation of spiritual seekers... The Time Machine Preamplifiers’ “The Four” targets the sounds of that tumultuous time in history, painstakingly recreating the sonic footprints of the Rock n’ Roll and Blues giants of the era. Think Hendrix’s “Are You Experienced?” clean tones (1967), Albert King’s late 60’s cranked amp tones (1967 and a half), and the late 60’s Chicago soul of Buddy Guy, and Otis Rush (1968). Designed and hand wired by Guitarist/Engineer Reeve Carney, right here in the USA.

1967 - While this circuit may certainly be used to approximate some of the tones off of Sgt. Pepper or Magical Mystery Tour, etc... it is specifically designed to replicate the clean tones of the soldier from Seattle, Mr. Jimi Hendrix himself. One of the cleaner setting in the series, this circuit targets the cleaner side of Hendrix ala “Are You Experienced?” Add a little Univibe, and Bam!

1967 1/2 - This one was tricky for me, as when I discovered it through trial and error it instantly Screamed Albert King’s “Born Under A Bad Sign,” which of course was released in late 1967... Since I had already determined that I would unofficially deem 1967 the “Hendrix” setting, I quickly decided to dedicate 1967 1/2 to Albert King. Serendipitously, as I have found to be the case with other circuits in the series, using Jimi Hendrix as an example, if you play a song like “Highway Child” (also released in LATE 1967) through the 1967 1/2 setting, you’ll find youself there... As opposed to where you would be, playing those same riffs through the 1967 circuit... Sounds crazy, but try it for yourself!

1968 - This circuit is my dedication to Buddy Guy and Otis Rush. Although, play a bit of “Heller Skelter” through this circuit, and it’s as if you are in the studio on a sweltering night with the Fab Four during sessions for The White Album. The truth is, you can get some killer Otis tones out of the 1967 1/2 circuit as well, but turn that high pass fully counterclockwise on the 1968 setting, and you’d be hard pressed to find a closer replication of Buddy’s tones from the Festival Express era, as well as his raunchy and explosive tones throughout his quintessential Junior Wells collaboration period.