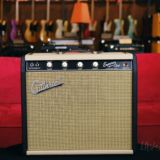 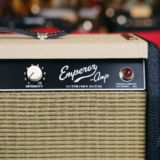 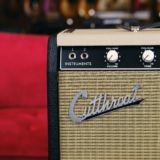 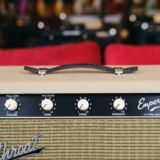 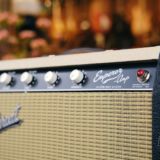 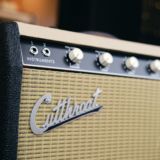 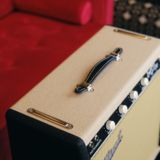 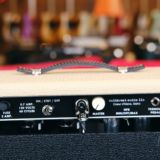 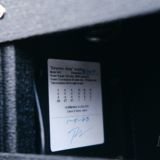 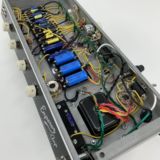 Check out this Cutthroat Audio "Emperor" 1x10 Guitar Combo Amplifier - an Homage to the 6G2 Brown Princeton! New & In Stock!

From The Cutthroat audio Site:

The Emperor -Amp™ is a respectful homage to the 6G2 Brown Princeton, that really does live up to its reputation as a screaming little dirt box.  This is not assembled from a “kit”.  The Emperor-Amp™ has about 175 parts, consisting of  approximately 90 discrete part numbers sourced from over a dozen different vendors.  No corners cut on these; only the best components were used.  Furthermore, it comes standard with some really cool features that take it well beyond a one-trick pony, without altering the original “brown sound” or DNA these amps are known for.  And yes, it has that seductive bias-vary tremolo found on just a few of the Brown-era amps.

Unlike a stock 6G2, the Emperor -Amp™ is a true two-channel amp (it has a 3rd 12AX7 added), but with common volume and tone controls.  Plug into Input 1 and you’ll get vintage spec, unmodified 6G2 tones.  Plug into Input 2 and you have JMP50 voiced preamp section for a very British flavored tone (i.e. tighter with slightly less gain).  Pull the volume pot and the Brown and British channels are internally jumpered.  Pull the tone pot and a gain boost is engaged (works especially well at lower volume settings).  Also present are a switchable rectifier (5U4GB & SS), switchable negative feedback (NFB) and the same excellent master volume used on the Down Brownie.  And for just a bit more power when you need, it sports the same Heyboer custom wound transformers used on it’s big brother the Down Brownie.  In addition to the bigger iron, a 5U4GB rectifier is used which still has nice bit of “sag”, and a Celestion 10″ Greenback which dovetails incredibly well with the 6G2 circuit.

You’ve probably noticed by now that it’s not a Brown tolex amp.  Well, turns out in late ’63 they made the 6G2’s for a short time in a transitional blackface color scheme.  Known as the “tuxedo” Princetons, they had black face plates, ivory “cupcake” knobs, black bronco tolex, silver grill cloth and black rubber “spring” handles.  As an homage to the 6G2 “tuxedos”,  the Emperor -Amp™ sports a black & blonde rough tolex (same cool texture as the brownface amps), wheat grill cloth, black faceplate w/ivory knobs and a black leather 6G3 style handle.