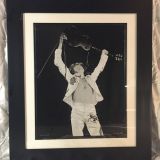 These photos are hand printed in Ed’s analog dark room , printed on high quality Ilford photo paper and individually signed , dated and numbered by the artist . All prints are limited to a run of 50 and many of L.A. Vintage Gear's prints are very low numbered examples