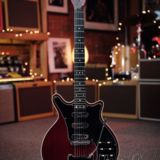 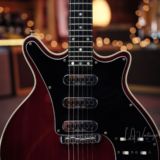 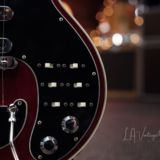 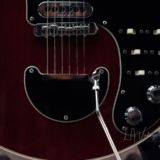 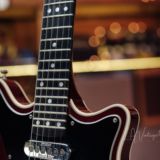 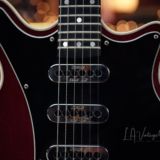 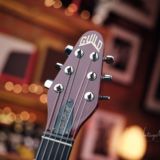 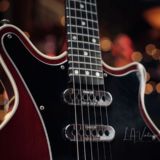 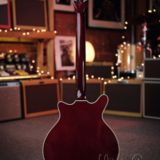 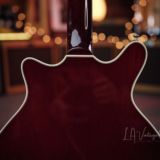 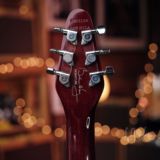 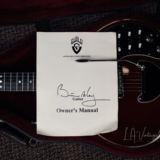 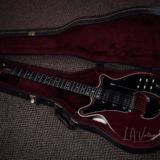 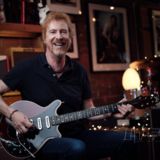 In 1993, Guild re-introduced the Brian May Signature Series, a limited run of 1000 guitars, with three new models. This is his top model of the series, the BM01 and is a very close copy of Brian's Red Special.It features Seymour Duncan pickups, which are very good copies of the Burns Tri-Sonics on the Red Special. Brian modified the original Burns pickups on the Red Special by re-winding them with reverse windings and also by potting them with epoxy resin to prevent them becoming microphonic. The tremolo/bridge system is a custom Schaller unit, which is also a very good copy of Brian's original.The body and neck on the BM01 are mahogany and the fretboard is ebony. The body has binding on both the front and back and a 5-ply scratchplate. The construction of the BM01 is semi-solid, again exactly reproducing the details of the Red Special. This model is known as the Brian May Signature and featurs a transfer of Brian's signature on the back of the headstock.Addition features include the offset double cutaway bound mahogany body, black laminated pickguard, 24-fret ebony fingerboard with pearl dot inlay, tune-o-matic bridge/Brian May vibrato, blackface peghead with pearl logo inlay, 3-per-side tuners, chrome hardware, 3 single coil Seymour Duncan pickups, volume/tone controls and 6 slide switches.

As with the original version, this body is made out of hand-picked mahogany that was cut specially to show the beauty of the grain. The fingerboard is made out of high-grade ebony with low frets for fast easy action. The neck is wider than most electric's (1 13/16 at the nut) allowing plenty of space for string bending and full control of chords with the left hand. Two full octaves are fretted with cut-a-ways allowing easy access to the 24th fret. The inlaid fret markers give a lot more guidance than on most guitars. The head of the guitar is shaped so as to position the tuning pegs almost in line with the strings, giving it minimum bending at the nuts. The graphite nut positions the strings horizontally, and a 'zero fret' positions them vertically. This eliminates tuning problems at low fret positions, bringing the open string sound into line with fretted notes. This nut arrangement holds tuning with aggressive vibrato use.

Vibrato units rock strings back and forth over the bridge, and twenty years ago Brian's guitar was the first to have micro rollers to eliminate friction at the bridge. This saves breakage, but equally important, enables the vibrato to return to true pitch, which has always been a problem with early units. Brian's own design of a frictionless vibrato uses a rocking plate on a knife-edge which hsa served him well. This vibrato will be identically reproduced by Schaller.

The Guild "Brian May" doesn't just sound like a typical Gibson Les Paul or a Fender Stratocaster. It gives you more in terms of getting your feelings across than any other guitar. The new re-issue has specially designed Seymour Duncan pick-ups which duplicate the original Burns Trisonic pick-ups. These pick-ups have a widened magnetic field, so that the unit picks up from a greater string length than the normal single coil pick-up. The end result is an output which retains the clarity of a single coul pick-up with some of the warmth associated with a hum-bucker. Equally as important is the way the pick-ups are wired in series, rather than parallel as normal, each has an on/off switch (upper row) and a phase-reversing switch (lower row). This is to product a large number of different sounds without having to use any tone controls.