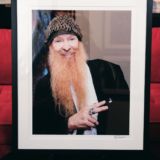 Billy Gibbons Framed Print. *Note - our Watermark is NOT on the actual Photo