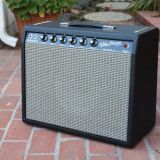 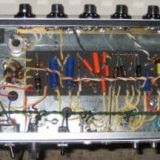 Magic Amps Vibro Prince is a great, may we say Princeton circuit done and voiced to perfection. Along with some cool options for speaker configuration. 1x10, 1x12 and 2x10 which we also have in along with Magics tweeds .

These amps have that classic vintage Princeton tone. To die for American cleans and great classic Fender Blackface break up when pushed.

The 1x12 a bit more headroom along with a little different personality that you would expect from going to a 12 inch speaker rather than the 10''.. lil less top end sizzle when turned up load and a bit warmer and smoother with dirt pedals. It has a lovely warm tone with great top sparkle you expect from an amp like this. Michael Moody really has these amps fine tuned and dialed in.

In Mikes own words-

Added features: standby switch in the ground position and through the chassis bias adjustment. The Vibro Prince is just like plugging into a brand new 60s Princeton Reverb.

Morgan Amplification M5 Black – Made for / Owned by Michael Landau
$1,995.00
Add to cart
Add to Wishlist