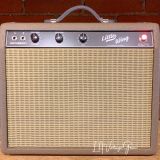 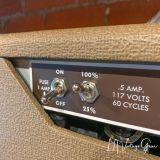 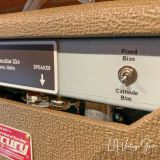 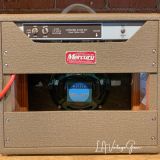 Cutthroat Audio’s Little Wing™ is the 6G1 Brown Champ that Fullerton never built (but should have).  Starting where the Tweed Princeton 5F2-A circuit left off (5 watts single-ended, single channel, Volume/Tone), Brownface-era capacitor and resistor values were selected to voice it accordingly.  Then, just to make sure it wasn’t a one-trick pony, a second British voiced (JMP50) channel was added to the preamp section.

What does it sound like? Like a Brown Champ would’ve/should’ve; warm cleans quickly transitioning to a pleasing overdriven crunch. Pull the Volume knob to internally “jumper” the Brown and British channels for a third unique voicing. Pull the Tone knob to boost the second gain stage.  The NFB knob rounds out the front controls, letting you fine tune the negative feedback for just the right amount of “hair”.  Around back, there’s an attenuator switch and a Cathode/Fixed bias switch which subtly changes the amp’s response or “sag”.

The Little Wing uses Mercury Magnetics transformers, a Jensen P8R Alnico speaker, SoZo coupling caps and carbon composition resistors, all handwired on a custom G10FR ‘glass circuit board. In other words, all the good stuff!  Here are a few of the features that set it apart from other amps in this category: